Through their eyes, we hope to present a detailed, but easy to understand, series of posts about how Cabernet Sauvignon and other affiliated grape varieties of the Bordeaux region (cabernet franc, merlot, petit vedot and malbec) can be used to make some of the most outstanding, but different wines due to regional differences between Bordeaux, and Paso. We hope you’ll enjoy this series.

Cabernet sauvignon is always thought of as the core Bordeaux grape variety, but in reality it is really only the star of the show in one region of Bordeaux referred to as “the Left Bank”, specifically the Medoc region. In fact, cabernet sauvignon is the only grape variety of the five main ones associated with Bordeaux* that we know for a fact actually comes from the Medoc.

A “child”, or crossing of two other varieties used in the region - cabernet franc and sauvignon blanc, cabernet sauvignon literally has its roots in the Medoc and is perfectly suited to the climate and soils of the region. Let’s have a look at why this grape variety shines so brightly in the Medoc.

With a forest on its western side to protect it from the cold winds that blow off the Atlantic and the Gironde River on its eastern shore, the Medoc sees temperatures that are only a few degrees warmer than the area often called “the Right Bank.” Cabernet sauvignon is a late ripening variety that has adapted to the weather of its home region, so much so that when planted on the marginally cooler Libournais, it does not show the greatness it does in the Medoc. For this reason, you will find that Merlot, an earlier ripening variety, is the variety that produces most of the great wines on “the Right Bank”, most notably in the regions of St. Emilion and Pomerol.

SOIL
Of course, this conversation would not be complete without a discussion of soils, and once again, the soils of Medoc are well suited to cabernet sauvignon, but maybe not for the reasons you might think. Yes the parent material for most of the soils in the Medoc and in much of Bordeaux is indeed calcaire, a type of limestone not so different than what we see in areas of Paso Robles, but as in most regions that grow great wines, there is an interesting interaction of soils, climate and geography behind the scenes in Bordeaux.

The best areas for growing grapes in the Medoc, cabernet sauvignon specifically, are large mounds of gravel that were deposited by the Gironde River over millennia that effectively lowered the water table by their height of only a few meters, providing good drainage to the sensitive roots of the vines that are grown on them. So you can see that in Bordeaux, like Paso Robles, water is also a challenge, but in the case of Bordeaux, there is too much of it! There is clay underlying the soils in areas that can be used for grape growing here, but the difference between a top line, or First Growth Chateau and a Cru Bourgeois, or common wine depends on the complex interaction of the height of the water table, depth of top soils, gravel, sand, and underlying clay deposits. 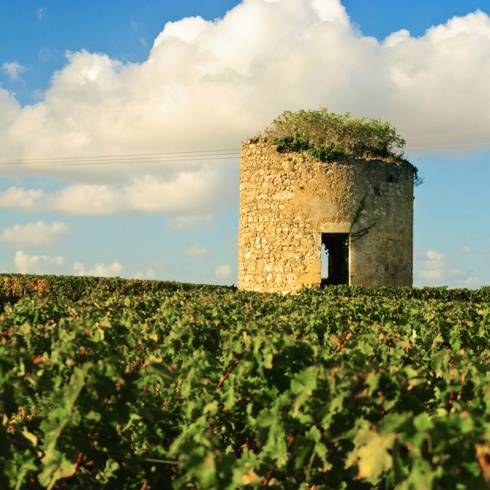 WEATHER
One last point has to do with the weather of each year. Unlike Paso Robles, Bordeaux receives rainfall through most of the year, with about two inches of about thirty four annul inches falling in the peak growing season of June through August, and an average of three inches in September alone, meaning a high probability of a wet harvest in many years. In the past, Bordeaux has been considered a marginal climate for growing late ripening varieties with one, or two “great vintages” occurring each decade. Climate change changed this with the last 20 years being only slightly cooler than the climate of Napa.

In its formerly cooler years, Bordeaux produced wines that were more hit or miss, with the greats being really great and the not so great being, well…sub-par. The character of the wine was harder, often requiring decades to soften harsh tannins and showing distinct green, herbaceous qualities in their youth. Most recently, Bordeaux has been producing much more ripe, earlier developing (still requiring five to ten years to soften) wines partially due to a slightly warmer climate, but equally due to high critical acclaim for more fruit driven, earlier drinking wines.